It was my birthday today! We started off with an early morning visit to Sensorji temple as it was just a few blocks from our hotel. Jill had visited this earlier in our trip while we were at Comiket, and told us she had a great time visiting it. It was about 8am when we arrived at the back entrance to the temple – this is actually a really good time to stop by as it’s nothing like as busy as it gets later on, simply because all the shops on the road leading up to the temple aren’t open yet.

The temple complex is huge with lots of, er, sub-temples is the only way I can describe it really. It ended up this way because the Japanese have a bit of a penchant for just moving religious structures lock stock and barrel around the city, and sometimes they’ll just combine everything together. Obviously there was the main temple building, which enshrined a Kannon statue some fishermen netted up from the sea (hence the temple seal being 3 fishing nets).

But actually one of the ones I liked best was Asakusa temple on the north east corner of the complex – that building had loads of tiny little details like little dragons engraved into the ends of the rafters.

I liked the Bell of Time too – the temple has a number of bells that each sound at different times of the day. 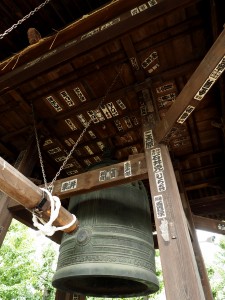 One of the big attractions at Sensorji is the pair of gates with their enormous lanterns and Buddhist guardian deity statues. They had different faces to their incarnations at Sanjusangendo in Kyoto. The lanterns were almost as impressive as the deities! There are nice carvings on the bottom of them too. On the back of one of the gates there are also the giant straw sandals, each weighing several tons. You can touch them for good luck! I had to jump ;_; 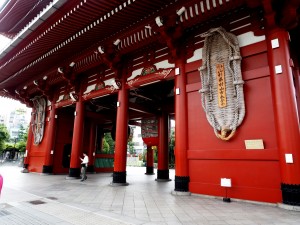 There’s also the oldest bridge in Tokyo within the temple grounds. The water is weird though cos they put blue dye in it. It seemed a bit pointless really. Another nice thing about the shops only just starting to open between the two temple gates was that we could see the cool painted shutters of the closed shops – you’d have no idea about these during the day when everything was open. We found a mikoshi one! 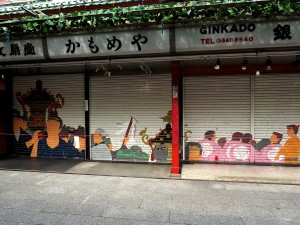 Some of the temples on the southwest side of the complex were having renovations but we popped into the Tanuki temple as that wasn’t having anything done to it. They had some pretty big Tanuki statues! We also had a nice view from there into the lovely gardens of the monks kindergarten, which is obviously closed to the public. So that was a nice bonus! 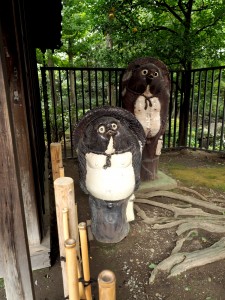 We found a fresh curry bread shop for our breakfast, and then onto my birthday treat – a freshly baked melon bread the size of my face! Asakusa is a district well known for its sweets and they have some really famous bakeries and sweet shops. My melon bread came from Kagetsu-do behind Sensorji temple, which is famous for its ‘jumbo’ melon pan. Ahhhh it was so good, talk about starting my birthday right! It was nice to browse around the general area as well. There is lots to see in this old part of Tokyo! After breakfast we headed to Akihabara to check out all the geeky shops. We had a specific list of shops to visit – last time we came to Japan we hit up all the used video game shops and came back with a bunch of goodies. This time we went to some of the figurine and character goods shops. We really didn’t like Akiba last time we went, so we planned our trip carefully to make sure we spent as little time there as possible while still being able to look for the items we wanted.

Actually, we didn’t find it as bad this time around, probably because we went first thing (most of the shops there don’t open till 11/12). Last time we went in the evening and it just wasn’t that nice tbh, it was mostly dodging soulless-looking maids who wanted you to come into their cafe. This time there were hardly any, woo! It’s still a really tiring and overloading experience shopping in that area, though – I was very done by the time we’d visited the last shop.

We managed to get away from there in the early afternoon, so we popped back to Nakano – this time the ufotable studio cafe was open! So we got a ticket for an early evening time slot. We had a couple of hours to kill before our slot, so we had a little mosey back around Nakano Broadway – you can go back to that place and see different shops open every time, I swear. Tom spent ages in the animation key frame shop deciding what he wanted for his collection that he’d started back in Kyoto. This place is an Aladdin’s cave with boxes on boxes of bits of paper backed with stout cardboard. Nothing is particularly organised so it’s just a case of going through and seeing what you find. He came away with frames from a few classic shows like Eureka 7, Full Metal Panic and so on.

We went back to the cafe, but we’d misread what was on the card indicating our time slot – we thought we needed to show up some time during that slot to be seated, but it turned out we were supposed to be there for the very start. Because of that we weren’t able to order any food, which was a shame, but they hadn’t really gone that all in on the themes for the food anyway, and we were only charged for what we ordered. So we just got some drinks – I went for a Fate/Apocrypha themed one that was bright blue, and Tom went for a lemon one that was themed after the new Prisma Ilya movie that’s coming out soon. We got free little matching coasters with the drinks so that was cute. My drink was a bit too sweet in a way but it was nice.

They had trailers for the upcoming movies playing on a big screen, and there were lots of little Fate series figures and things around the place. They had an exhibit of key frames from the new Fate movie that’s coming out soon. I bought a big clearfile from the shop that was cooking themed to put all my recipe magazine cuttings into, so that was useful! I think overall the cafe wasn’t really anything to write home about – it has some fun merchandise limited to the cafe but they didn’t really try very hard with the actual food and drink so the actual experience of eating there isn’t anything that special. I liked the Puyo themed cafe we went to in Harajuku better, it was a lot more fun and on theme! I guess if you’re visiting Nakano anyway it’s worth dropping by and seeing if they have a slot, but I was actually glad we weren’t ordering any food there as it didn’t really seem like value for money.

So after that we headed back to Asakusa and had a cheeky pizza picnic in the hotel room – it was a really good pizza place actually!

Turns out yesterday’s storm was a passing typhoon! We drove back to Ishigaki airport in a deluge, visibility was pretty terrible so we were glad hardly anyone else was out on the roads that day! It was just as well it was our last day on the island – our flight back to Tokyo was at midday so we pretty much just handed back Wendycar and that was that. I enjoyed one last bowl of Yaeyama soba for lunch (no more delicious belly pork, sads) – Ishigaki airport is tiny but if you go down one of the one-way side corridors before security, there’s a really decent restaurant tucked away that is well priced and tasty. We had no idea what was on the menu as it wasn’t translated, but we guessed the soba would be so we took a gamble and just asked for it!

We landed in Tokyo at around half three. We were staying in the Asakusa area this time so it took us a little while to get there and drop off luggage. We opted to head out to the Tokyo Bay Area for dinner and ended up at a random gyoza place in Diver City. We’ve not been to Diver City at night before – it looks pretty! Onthe way there we stopped off to see how the building of the new giant Gundam was going – turns out it was almost finished! They’re meant to be unveiling it properly in the autumn – it already looks pretty cool. We could see people walking around inside it and working on it. The new Gundam shop had only opened two days previously so we wandered inside to check it out. Turns out they were doing a stamp rally but it finished at 7pm, booo! But the shops and the museum were still open so we had a brief nose. They had a special exhibit on Build Fighters in preparation for the new series, which included animation key frames and a few other bits. The shop had some nice limited edition stuff, especially the clear colour Strike Freedom, but nothing that we were desperate to own, and we did buy quite a few kits last time we visited, so we didn’t end up picking anything up. We enjoyed checking out the gunpla kit-bashing competition entries though, there were some really cool ones! 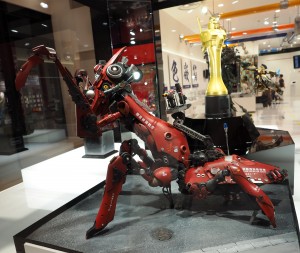